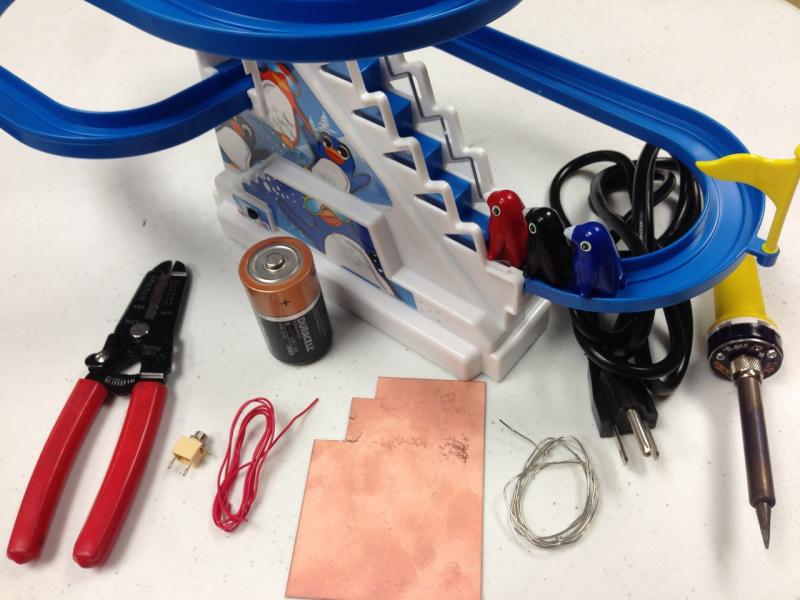 The battery interrupt is a component that sits between a battery operated device and a capability  switch, it allows a capability switch to control the ON & OFF of a battery device such as a toy or radio. The device “interrupts” the battery’s flow of electricity using double sided copper clad which is typically used for electronic circuit boards.

The battery interrupt accepts the standard 1/8″ (3.5mm) mono plug used with switches. Using a capability switch, a person might use their head to control a toy or their fingers or feet to activate a small fan.

Double sided copper clad is just like a sandwich, a piece of non conductive silicon wafer is sandwiched between two pieces of thin copper, the copper pieces are not touching. Electronic circuit board use this material to print double sided circuits.

To make the battery interrupt we will do the following:

Want to try this at home?  Purchase one of our component kits for $9.99

Cut out two small squares of copper clad using the wire cutting part of your wire strippers (usually located at near the joint of the tool). You will hear some crunching sounds and feel resistance, this is the silicon wafer you are cutting through.

The squares will have sharp edges until cleaned up – take care while handling them. 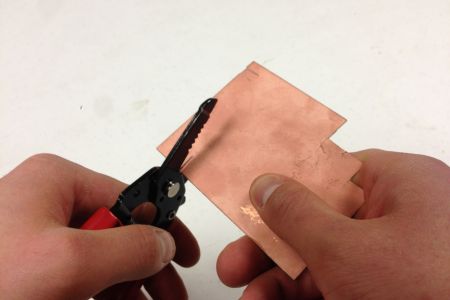 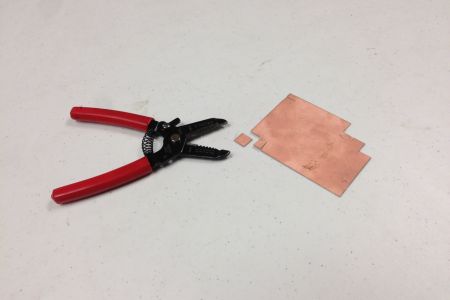 The idea is the same with copper foil sheets, using scissors cut two small squares of copper. It is probably best to use older scissors to not dull your good pair. 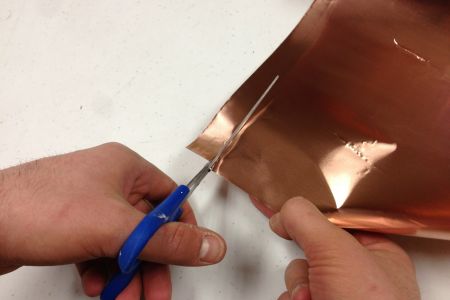 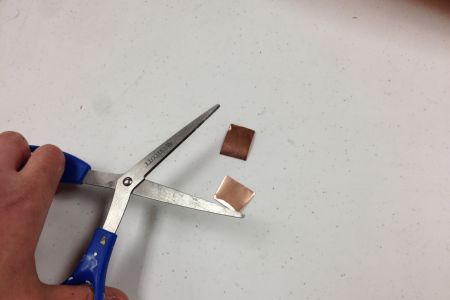 Cut a square of cardboard

Next we will prepare the insoluator from cardboard. Cut an identical square from a small piece of cardboard the thickness of a postcard or cereal box top is preferred.

This cardboard will be sandwiched between the two copper squares below. 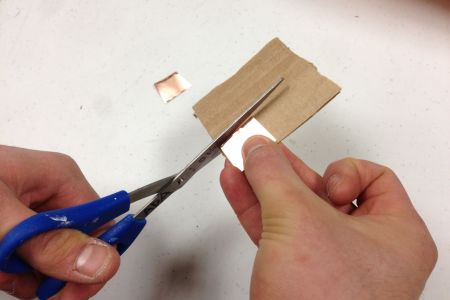 Using double sided tape, put the copper squares on either side of the cardboard. Trim the final square to make edges even. 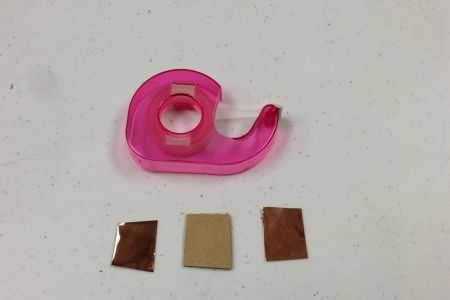 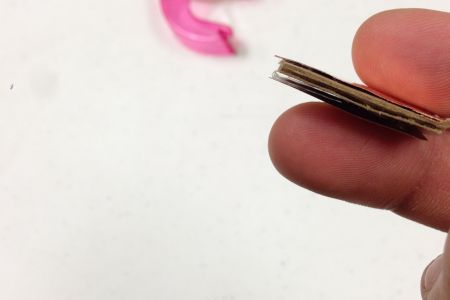 Cut two wires about six inches in length. Strip 1/4″ of plastic from wire on each end. 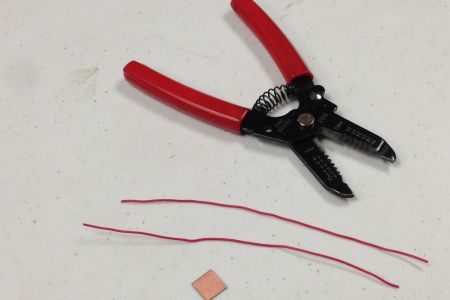 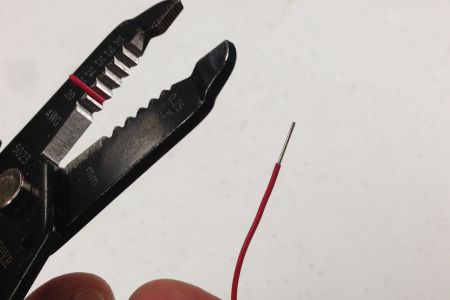 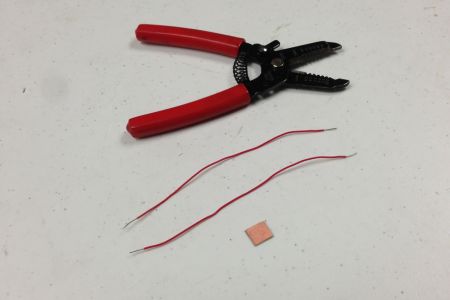 Position copper and wire for soldering

Plug your soldering in now.

Using helping hands position the copper clad and wire. Only the stripped part of the wire should be touching the copper. 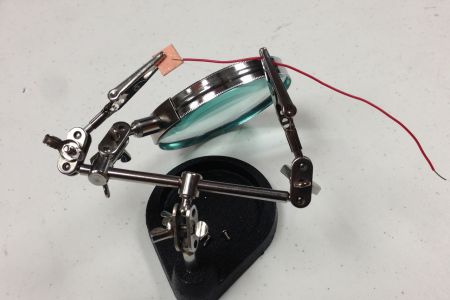 Gently touch the soldering iron to the stripped wire to heat it. Touch solder to stripped wire. Solder should melt and cover wire and copper. 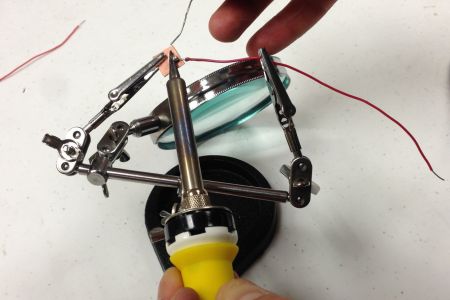 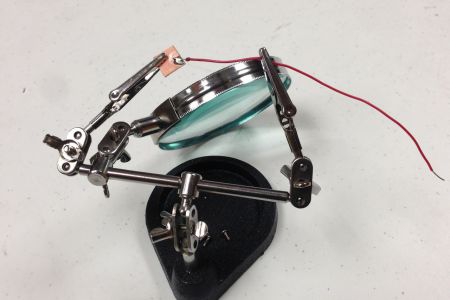 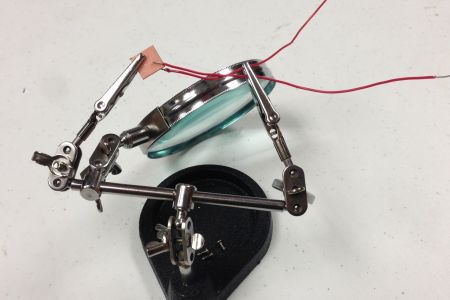 Final product should have a small solder joint connecting the wires and copper clad on each side. The wires should not wiggle on the copper. 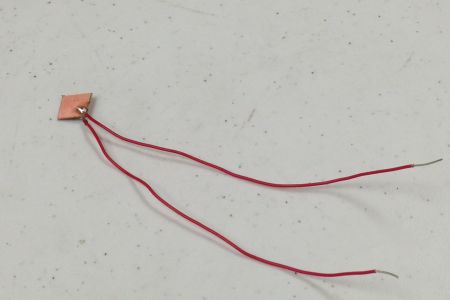 Put the battery interrupt into a battery operated toy, this toy uses a C battery, The positive end ( + ) will touch one side of the copper clad, the other side of copper clad will touch the toy’s battery connector.

TIP – for some toys, it is easier to install the battery first, slide the battery towards the negative side so a gap opens near the tip of the battery. Slide battery interrupt into the gap between the + end and the toy’s connector.

Take the 1/8″ (3.5mm) female switch jack, identify the tabs that will be connected. This particular switch jack has 3 tabs, we will connect a wire to two of them, the tabs on either side, skipping the middle tab. 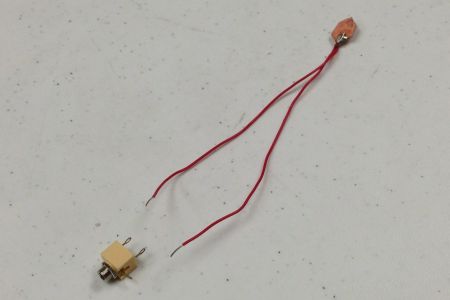 Bend and hook it

To connect, bend the wire into a hook and thread it through a tab on the switch jack. 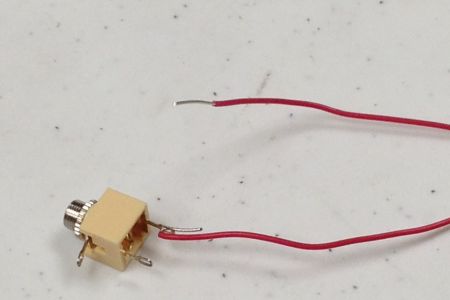 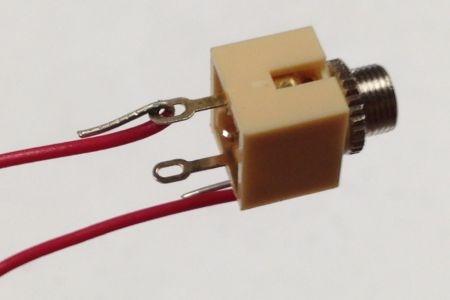 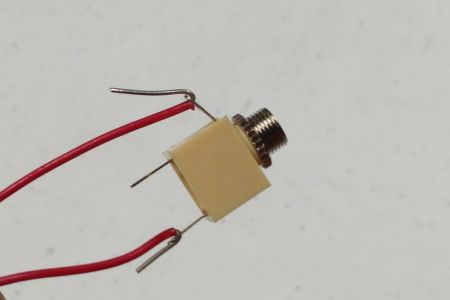 Use helping hands to hold switch jack and wire

With the tabs tightly hooked, fasten the switch and the wire to the helping hands. The wire should be pulled tight so the wire is touching the side of the tab.

Solder the wire and tab together. 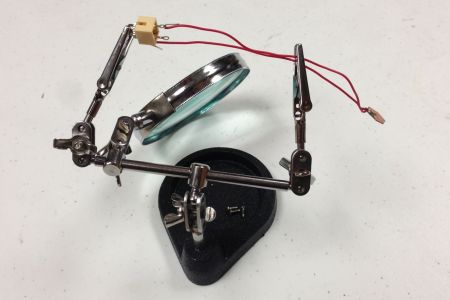 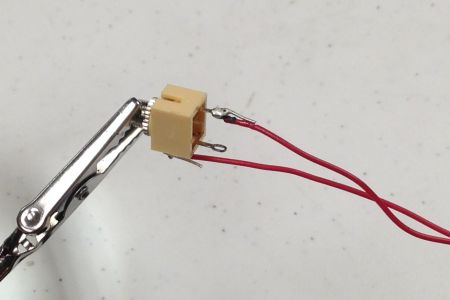 After finished with the first wire and tab flip the jack and solder the second tab and wire. 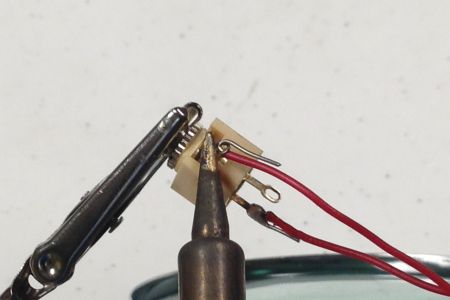 With both wires soldered to the switch jack, the solder pads should be small and the wires should not wiggle. (the middle tab is unused with this particular jack) 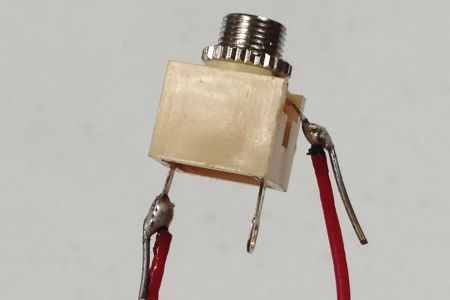 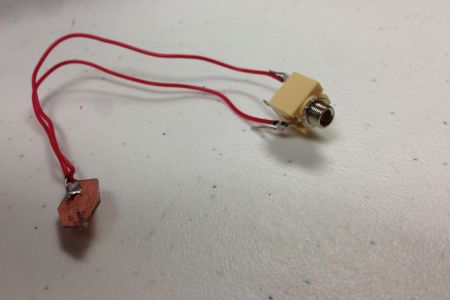